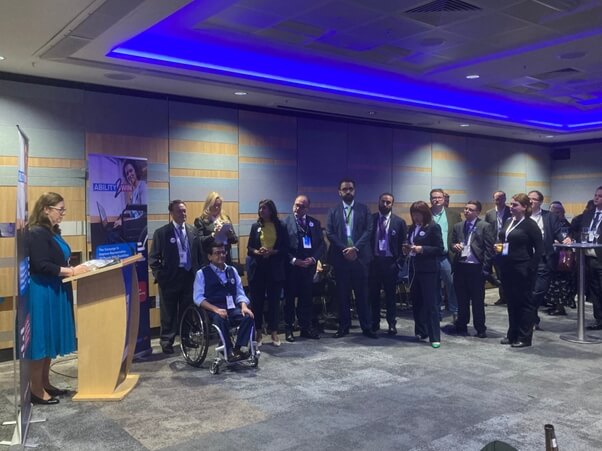 Dr Maurizio Bragagni OBE attended the Ability2Win event that was organised in the margins of the Conservative Party Conference on 3rd October 2022. The event was moderated by the Ability2Win co-Chair, Dr Caroline Johnson MP, and benefited from the participation of the new minister for Disabilities at the Department for Work and Pensions (DWP), Ms Claire Coutinho MP, Baroness Anne Jenkin, founder of Women2Win and many others.

Also present was Dr Mustafa Mohammed, Founder and Chair of this imitative, Managing Director at Genix Healthcare, a company which was founded in response to the severe shortage of NHS dentists. Its aim is to make dental care accessible and affordable to all and to give both NHS and private patients an excellent standard of care.

Dr Mohammed is a staunch supporter of Ability2Win initiative and he doesn’t spare any efforts in supporting people with disability to enter politics and removing barriers in making politics more accessible to all.

Dr Maurizio Bragagni OBE was delighted to give a speech and share with the audience his support to this initiative and the importance of making politics more accessible to all and increasing the level of representation of people with disabilities into the UK political spectrum.

Dr Bragagni highlighted the view that as the UK has embarked on the journey of opening the country to talents, making the country the best place in the world for innovative and talented people to live, work and be successful, it should encourage and actively support the participation of talented people with disability in a wide spectrum of societal roles, starting from a wider representation in the Parliament.

He reminded the participants that a core principle of representative democracy is that all sections of the public have equal rights and opportunities to participate in political decision-making, both as citizens and as representatives.

The evidence deriving from several reports, including from government, tells that disabled people, who make up around 1 in 5 of the UK population according to the latest statistics from DWP, are under-represented in politics at different levels of government.

Dr Bragagni concluded by saying it’s time to act boldly and deliver on the noble cause of supporting people living with disabilities. Each department of the UK government has a vital role to play in improving the everyday lives of people with disability, at the same time they can benefit from their increased participation into public life.