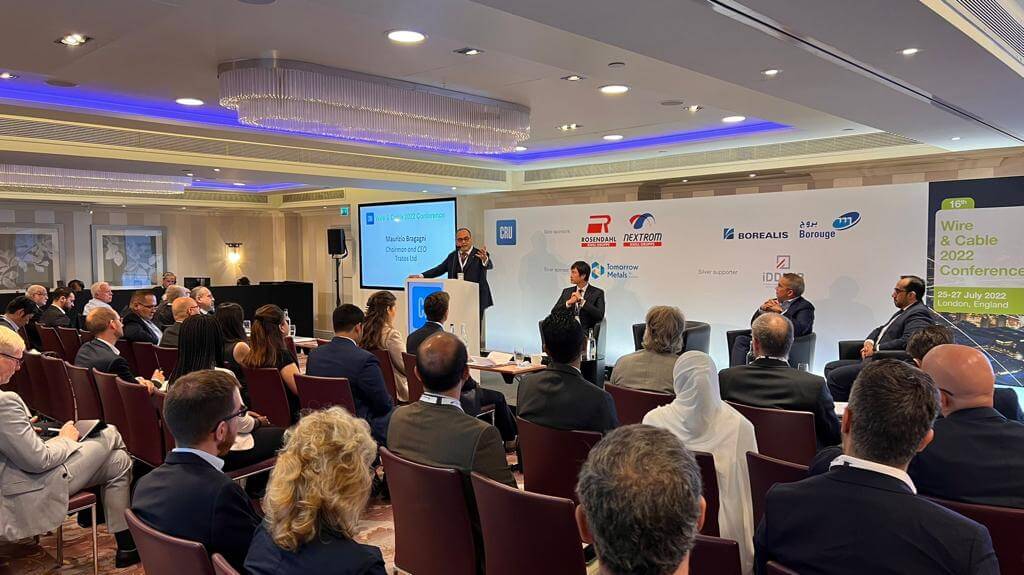 I was delighted to participate as a panel speaker at CRU’s Wire & Cable 2022 Conference, on 26th July 2022 at the Sofitel London St. James Hotel, together with other cable industry experts where we explored how the outbreak of war in Ukraine, sanctions on the Russian economy and associated inflationary pressures on energy and raw material supply have impacted wire and cable market dynamics.

Below is an excerpt from my speech.

I will try to do my best to achieve a balance among the distinguished speakers in this panel, as we all are going to offer our experience and expertise in dealing with the issues caused by the war in Europe, a cost-of-living crisis, a climate emergency—and all erupting at the same time just after a global pandemic, which is not over just yet.

I am going to offer my personal views integrated with some academic perspectives in my capacity as a Visiting Professor for the Institute of Management and Leadership at the University of Bolton and an Honorary Senior Visiting Fellow of Management at Bayes Business School, City University of London.

When I started working for my business, Tratos back in 2000, I remember the world was very open to doing business, globalisation started and the offshoring companies were welcomed to produce new jobs and wealth in another country. As a consequence, during these 22 years, global wealth has increased gradually, poverty has reduced, and life expectancy has increased along with better education and widespread healthcare services being accessible to the general population worldwide.

Then we had the first financial crisis in 2008 that put globalisation under massive threat. We witnessed worldwide the spark of nationalism, with many governments represented by supporters of nationalism.

A clear example was the election of the 45th President of the United States, Donald Trump. His presidency began with his inauguration in January 2017 and ended with his defeat in the 2020 presidential election to Democrat Joe Biden after one term in office. It was the first Presidency since that of Herbert Hoover in 1932 in which a sitting president was defeated and his party lost its majorities in both chambers of Congress.

Trump’s policy of “America first” has shaken the foundations of global trade, slapping steep tariffs on billions of dollars’ worth of goods from the EU, Canada, Mexico and China. In May 2018, the president announced a 25% tariff on all steel imports and 10% on aluminium. All these countries responded with hostility, retaliating with levies on thousands of US products, which has put the world’s largest economies at each other’s throats.

To give you an example, before Trump’s tariffs, the export of agricultural products from China to the US was around 22 billion. The effects of protectionism tariffs drastically reduced the trade of these goods down to 6 billion. The products that were under the customs duty and tariffs regime before 2000 were about 120, now we are talking about more than 700. So, 7 times more products are now under the importing tariffs.

International trade barriers have increased, not reduced. That’s the fundamental reason that caused the price increase. The tariffs imposed on goods around the world resulted in increased costs that are paid by increased prices and inflation. The increased costs of products are paid by Mr/Mrs Smith, meaning everyone of us as the end-users.

Globalisation as we have known it no longer exists. Protectionism has caused a lot of other problems. One of them is that international organisations have lost their efficiency. WTO, WHO, UN etc have significantly lost their ability to react. Countries are acting alone and not in partnership, as it was required for example to stop Covid-19 from becoming a pandemic or to end the pandemic faster.

Covid-19 was another major disruption to the already fragile supply chains. Again, countries were responding to the pandemic on a national scale basis, not global. Countries were divided on whether they “have” or “have not” got Covid-19 vaccines available to protect their population, with Africa as a continent left on its own, without minimal support to secure access to vaccines.

As the Honorary Consul of San Marino to the UK, I was unsuccessful in securing support from the UK government to make the AstraZeneca vaccine available to the San Marino people. The San Marino government could not obtain any other vaccines, except Sputnik, which wasn’t recognised by the UK and EU countries for the purpose of international travel. That caused immense trouble to the citizens of San Marino, they felt isolated and neglected by the EU surrounding countries and WHO.

The lockdowns during the pandemic created another massive disruption to the world economy and trade, associated inter alia with increased availability of money to spend, which in turn created other favourable conditions for prices to hike.

After a fragile recovery from the pandemic in 2021, the world economy in 2022 is facing market conditions of a “perfect storm”. The war in Ukraine was the latest disruption in this long chain. It further exacerbated the supply chains as countries imposed economic sanctions on Russia, which in turn retaliated by cutting the gas supply to the EU, as well the war created a scarcity of goods and raw materials mostly imported from Ukraine and Russia.

Geopolitical, market and financial volatility can generate unintended and unpredictable consequences, with Russia’s invasion of Ukraine and the West’s response providing a dramatic illustration of how combustible that combination can be. The severity of sanctions and the multi-lateral response of non-aligned countries (most of all China, India and Brazil) have caused a disruption of flows of commodities and energy that are crucial for the world economy.

Ukraine and Russia export raw materials including copper, aluminium, oil, bitumen, neon (used in semiconductors for micro-chips), timber and iron ore used for steel. Reduced supplies from both countries to the UK (or Europe where the UK then sources the materials) caused by the war, or sanctions imposed in response to it, will trigger shortages and delays. The impact will be felt at almost every economic activity.

The volatility of markets worldwide is affecting almost all industries, the cable-making industry was heavily impacted and can expect these conditions to persist for some time.

Scarcity of raw materials and goods is another term widely forced to enter the daily usage in our business meetings. Scarcity is further burdening the already stretched supply chains, causing delays in producing, shipping and receiving goods.

The world is split. And this is not because of the war in Ukraine, which is the latest disruption, it started a long time ago. It started with globalisation, offshoring, transportation link failures, air transport malfunctioning and freight costs increasing 20 times,  etc.

But, in my opinion, the most crucial factor here is the increase of global tariffs that are stopping the flow of global trade, stopping productivity and creating poverty, waves of migration and inequalities.

We need urgently to reinvent globalisation, reform the WTO and make it efficient, reduce global tariffs and make the global trade flow again.

Instead of wasting resources and money on measurements, and other counterproductive activities, we need to invest more in the education and health sectors, as they are crucial for the people and enablers of sustainable growth.